Low Correlation to the Rescue
Unemployment and the Fed
February 28, 2013 by Chris in Rain Capital 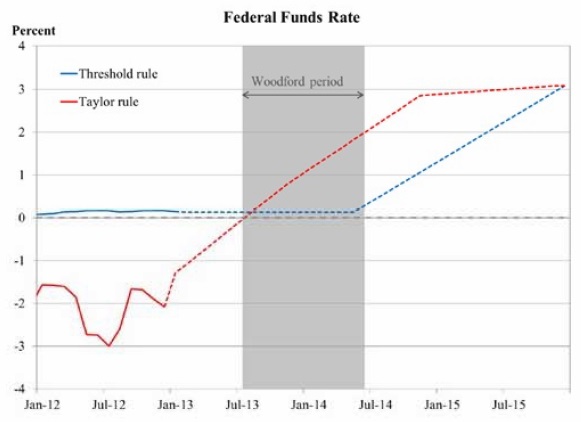 The job of the Federal Reserve is ‘to take away the punch bowl just as the party gets going’ as one Fed Chairman once said.  Typically the process has started with a hike in short-term interest rates, a step toward the exit with the punch bowl in hand indicating the economic party was getting raucous.  Never in the past has the Fed sounded a bell or yelled ‘last call!’ before the bar closed.  The concept of exit in a zero interest rate environment is a different beast, however, and St. Louis Fed President James Bullard just gave us the equivalent of a last call in his remarks last week in New York.

A couple of takeaways from Bullard’s comments that are meaningful:

We’ve combined this data with the shifting projections of Fed participating board members to better show why else guidance may have shifted from the ‘unintentionally pessimistic’ time frame of mid-2015 to something more specifically likely to occur well before that.  Depicted below are participant’s projections of unemployment and inflation, from both September and December 2012 meetings; in light of these views, we’re not surprised the Fed – the taker-in-chief of the punchbowl – just issued the last call for drinks: