Information Days
From Dove to Hawk?
January 13, 2014 by Chris in Rain Capital

Unemployment and inflation generally work against each other.  The Fed was counting on that relationship holding up when it established a dual threshold based on those indicators in late 2012.  The idea was that as the two converged (or diverged), markets would better understand the future direction of monetary policy and adjust accordingly.  [i], making inflation the data point markets will be forced to fixate on this year.  Given the back drop of a stronger economy and widespread bullishness, we think the greater focus on a single data set, inflation – which itself is more prone to surprises –  will make for a more volatile market environment across asset classes this year. 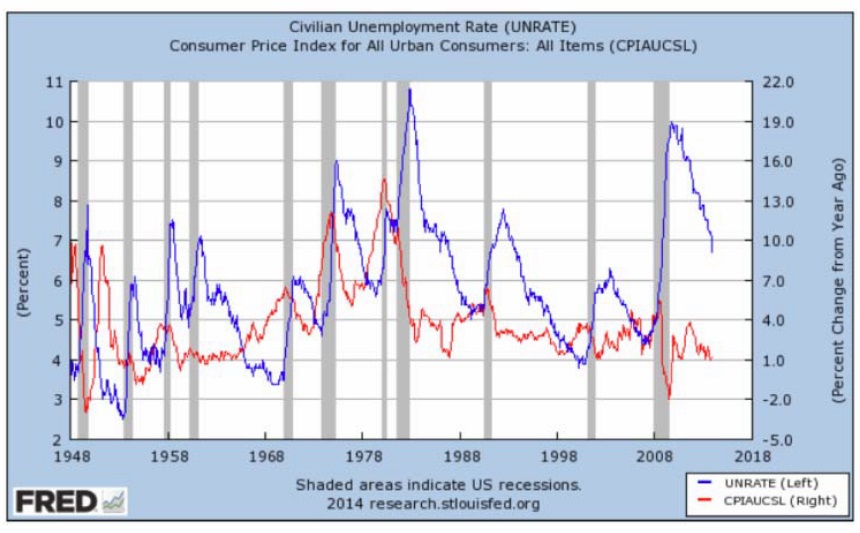 2013 was a year during which the market largely played catch up to policy makers.  In late 2012, the Fed clearly established that the economy was strengthening enough to justify a change in forward guidance that would allow for an earlier exit from quantitative easing (QE) than had previously been communicated.  Over the course of the year in its effort to reshape the yield curve, the Fed successfully trained the market to focus on data related to unemployment and inflation, rather than the more ‘pessimistic’ guidance to a date far off in the future.  In doing so, markets became increasingly comfortable that the slow but relentless economic recovery was real.  By May, the Fed reminded us of the consequences of improving economic data in the context of the new forward guidance framework: an earlier exit from QE than most had anticipated.  The ensuing turmoil in bond markets was disorienting for anyone who relied on exposure to most traditional bond sectors for capital preservation.

The word ‘taper’ had been introduced into Wall Street’s lexicon and the Fed spent the rest of the year explaining that tapering was not the same as tightening.  In essence, the Fed argued it could reduce and eventually eliminate its massive bond buying program without hurting market liquidity.  Furthermore, it could begin this exercise well before increasing the fed funds rate.  The market got the message that the liquidity spigot was slowly closing, but that no one was about to drain the bathtub quite yet.  By the end of the year, US equity markets had risen strongly, most bond sectors were underwater, and equity market bullishness prevailed.  Just a few days ago, outgoing Fed Chairman Ben Bernanke proclaimed that the headwinds that have held the economy back for many years may be finally abating, a point that is well supported by the data.

Bernanke’s comment and the generally bullish sentiment prevailing right now reflects the perception that there are fewer twists and turns in the road ahead than perhaps a year ago when anxiety ran high.  At the same time, by subordinating the unemployment threshold to inflation, the Fed has significantly constrained the dataset the market is likely to react to going forward.  Furthermore, that focus lies on data that are more prone to surprises – inflation.

This results in the perverse outcome of an increasingly confident market that is quickly losing its ability to see much beyond the next data release.

Complicating things further, we believe markets are now far too sanguine about the eventual ‘lift off’ from zero interest rates.  [ii]  The widely held misperception that we are due for a gradual lift-off in the fed funds rate along the lines of the current gradual tapering program is simply not what the Fed has been communicating this past year.

In many ways Janet Yellen is the ideal candidate to carry out this delicate balancing act.  She is both a protégé of Bernanke’s quantitative easing strategies and perceived to be one of the more dovish members of the FOMC. As a QE acolyte, she represents both the policy continuity and gradualism the Fed has been trying to communicate around tapering.  On the other hand, as a policy dove she may be the most credible leader to push for aggressive tightening when that time comes.  While Nixon-goes-to-China may come to mind, Yellen also has a lesser-known history as a policy hawk (in the mid-90’s, she was far more focused on inflation as the primary risk to the economy).[iii]  The reality is that she is more of a central banking technocrat – very data driven and generally focused on understanding the balance of risk between unemployment and inflation, rather than consistently advocating for one or the other.  In this sense, she is well suited to playing the role of first good cop, then bad cop that the next Fed chair will likely have to play.

We continue to believe the Fed’s guidance is part of an intelligent and well-choreographed exit from quantitative easing.  However, we believe the relative importance that inflation data now have as well as the market’s lack of focus on the entire Fed narrative will make for a more volatile market environment in 2014 across asset classes.  While there is no reason to fear that the removal of monetary stimulus will undo all of its benefits, the transition phase that is now well underway calls for more cautious portfolio exposure – both in rate-sensitive sectors and certain growth assets – than we had in 2013.