Shared Value
Fed to the Rescue
December 20, 2019 by Chris in Impact Investing

The insurance industry isn’t usually who we turn to for solutions to humanity’s most pressing issues. However, far downstream from the vanguard of individuals who have been investing in companies that are making positive changes to their environmental, social and governance footprint in the world (and, likewise, divesting from bad actors), is a movement among insurers who themselves face an existential threat from climate change. Insurers and their policyholders face enormous exposure risk from climate change on several fronts and, as a result, they are being forced to do a better job of valuing climate-related risks on both the asset and liability sides of their balance sheets. We believe this repricing of risk will have profound implications for the allocation of capital that stretch well beyond the insurance industry and will likely lead to a large-scale shift toward lower-carbon projects and “greener” assets.

Losses from natural disasters have increased in recent decades. 2017 was the most expensive year on record for natural catastrophe events, with a total of $344 billion in global economic losses, 97% of which were due to weather-related events. Of that, estimates of insured losses totaled $140 billion: 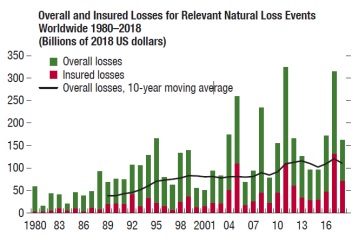 By the year 2100, global economic damages are estimated to reach $69 trillion with just 20 C of warming above pre-industrial levels, the threshold that Paris Agreement signatories have pledged to target. However, even if every country met its Paris Agreement commitment, scientists believe global temperatures will likely still increase to at least 30 C.  At that level, damages are estimated to exceed an astounding $500 trillion. With only 6 of the world’s 20 largest economies currently on track to meet their Paris commitments by 2030, the insurance industry is skeptical that the global community will be able to avert disaster.  It is acknowledging that it faces a paradigm shift in how it needs to think about and prepare for climate-related risks. The staggering liability that is at stake is not just a game-changer for the industry; it would be a game ender given historical industry practices.

Regulators are also taking note. The 2008 credit crisis awakened regulators to the reality that financial institutions and markets are interconnected in ways that can be destabilizing for the global economy. In 2019, that focus on systemic risk has turned to how the financial industry is responding to climate change. Both the IMF and the Bank for International Settlements (the central bank of central banks) have weighed in on the issue and are focused on two primary channels of risk they see emerging from climate change: physical risks that arise from damage to property, land, and infrastructure due to catastrophic weather-related events, and transition risks that come from stranded assets (assets – like coal investments – that may suffer from sharp write-downs, devaluations or even that may turn into balance-sheet liabilities). The very process of moving toward climate-change solutions – weaning the global economy off carbon-based energy – itself could impact the asset price of large sectors of the economy like coal, oil and gas, and of companies that produce cars, ships, aircraft and so on. Regulators worry that all of these assets could be vulnerable to a change in investors’ perception of profitability and business sustainability.  These are assets that insurance companies are exposed to in a multitude of ways; they insure them directly, hold them as collateral, own them in their investment portfolios and may even face claims due to other companies’ failure to properly disclose climate-related risk to shareholders. To the extent these changes are abrupt, regulators worry that a fire sale of these assets might trigger a financial crisis.

As a result of this pressure and in their interest of self-preservation, financial actors are paving the way toward more accurate valuations and better transparency related to climate change risks. Whereas Wall Street has been happy to market ESG products that in many cases lack transparency or are difficult to measure in terms of success or failure (as it relates to meeting stated ESG goals), insurance companies are actively reassessing their cost of physical risks, divesting from fossil fuel assets, and scaling back insuring the fossil-fuel sector altogether; banks are curtailing the financing of companies in the fossil-fuel industry; rating agencies are reassessing the quality of credits (particularly those of coastal communities given sea-level projections); asset managers are becoming increasingly selective around these issues both by excluding bad actors as well as being more inclined to include “green assets” in their portfolios; and pension funds are beginning to reassess their exposures to climate-related risks and exposure to “dirty” assets.

When the insurance giant Allianz announced last year that it would no longer insure single fired coal power plants and all operating and planned coal mines, it did so out of self-preservation. The knock-on effects, however, were huge. Lloyds Banking Group followed suit by announcing it would refuse to finance new clients whose revenues predominately come from coal power plants and mines (why, after all, would you make loans to an industry that is quickly reaching obsolescence?). Even further downstream, the global mining giant Glencore, in a bid to maintain its financing and insurance relationships, announced that it would limit coal production capacity to current levels and has ramped up its production of higher-quality, less carbon-intensive iron ore. In many ways, insurance companies are at the top of the food chain when it comes to enabling change and we can see this in the ripple effects their policies have throughout the economy.

In contrast to the more altruistic approach that impact investors have taken in response to climate change, insurance companies are driving asset values and transparency as a direct result of the existential threat facing the industry. As the industry measures its exposure to the physical and transition risks related to climate change, it is pouring resources into measuring and pricing the effects of these risks on business disruptions, asset destruction, migration, reconstruction and replacement, lower values of stranded assets, increasing energy prices and so on. In their bid to mitigate underwriting losses from climate change, the typically staid insurance industry is being forced to provide the robust measurement, pricing and transparency related to climate change risks that have been sorely lacking from other financial services participants. The knock-on effects are just beginning to appear in how capital is allocated across the economy, driving money away from companies with poor ESG practices and toward “greener” and less carbon-intensive businesses, rewarding borrowers for taking proactive steps to mitigate their own exposure to climate change and penalizing those who are unable or unwilling to adapt. The insurance industry’s process of managing risk is one of creative destruction; in the process, it is creating a multitude of opportunities in the impact investing space.