As the pandemic recedes, so too will the rationale for further policy support
Shareholder Activism Heats Up
Inflation Rears its Head
July 21, 2021 by Chris in Rain Capital

The US economy surged through the second quarter on the back of massive fiscal stimulus and public health data indicating that the worst of the pandemic is behind us. Equity markets continued to rally, home prices surged, and unemployment fell in one of the strongest recoveries from recession in modern history. However, the extraordinary strength of the recovery, coupled with a receding pandemic threat also means policy support is likely to wane going forward. Developed market central banks have already begun to taper bond purchases (though interest rate hikes remain a long way off) and the prospects of more large fiscal support packages (notwithstanding infrastructure spending) in the face of a daunting federal debt burden are next to nil. Furthermore, as the economy transitions from public-sector led activity to one driven by organic growth, economic challenges are emerging as supply chain interruptions, labor market distortions, and inflation concerns take root. Equity and fixed income markets will spend much of the coming months digesting the implications of these imbalances. As valuations in many markets remain elevated, we are focused on finding returns without taking undue risk and building globally diversified portfolios that can withstand a number of different economic scenarios.

After decelerating during the first quarter as virus cases surged, the economy reaccelerated into Q2 and is now registering more than 10% real GDP growth. In the second half of the year, strong consumer spending on goods is expected to give way to more spending on services as coronavirus restrictions are lifted and consumers reemerge into restaurants, gyms, hotels and so on. Overall, growth will decelerate slightly during this transition in the coming months but will still finish the year up more than 7% over the previous year, marking a full recovery from the COVID-induced recession. 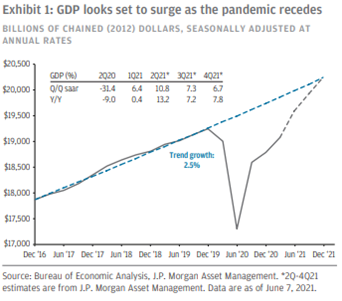 The job market has seen a similarly strong rebound. After a disappointing jobs report in April, the economy clocked a net gain of 559,000 jobs in May bringing the unemployment rate from 6.1% to 5.8%.  Businesses report that they are struggling to fill positions and, based on survey data, the labor market is expected to tighten further as the country reopens and generous federal unemployment benefits expire (more than 40% of workers will see benefits expire in early July and most of the rest of the workforce by early September).  As these labor market distortions disappear, we would expect hiring to pick up and unemployment to drop below 5% by the end of the year.

While robust growth and tightening labor conditions have been accompanied by higher inflation, there are several reasons to believe price increases will be limited and temporary.  As we discussed in our previous communication, the base effect (calculations of change that start from very depressed prices at the inception of the pandemic) contributed to the large percentage increases included in the year-over-year numbers published in April.  In addition, more than half of the total increase in CPI over the past few months is attributable to used cars, rental cars, hotels, and airfare.  These are relatively small categories whose prices have been heavily impacted by reopening effects and supply chain interruptions, both of which are temporary in nature (reopening is a one-time thing).  Meanwhile, price changes in larger categories like rents and healthcare remain tame.

As supply disruptions ease into next year and demand reverts to more normal levels, we would expect core inflation to decelerate again. While this is the base case articulated by the Federal Reserve, this outcome is also being priced into bond markets, which are indicating that inflation expectations mellow out after an initial surge in the middle part of this year. Although there is some limited evidence that employers have had to raise wages to attract people back to work, we believe this pressure will ease as enhanced unemployment benefits expire. Should this persist, however, higher wages could lead to inflationary forces that are less temporary than current expectations and force the Fed to move on interest rates before the economy reaches full employment.