A New Frontier in Divestment?
Shared Value
October 29, 2019 by Chris in Rain Capital

Equity and bond markets can’t agree on one basic question this year:  is the economy headed toward recession or not? US equities, which were up more than 20% through the end of Q3, seem to be brushing off signals that the economy may be slowing while bonds, up more than 8% (corporate bonds more than twice that) through the same period – far better than their stellar performance during the 2008 credit crisis – seem to be pricing in a sharp recession. The euphoria in stocks may reflect a hope that a trade deal between the US and China will eventually get hammered out, while bonds seem to be acknowledging the damage already done by the tariffs that are in place. Which market is correct is anyone’s guess, so we’ve taken an approach to portfolio construction that will reduce the consequences of being wrong while still allowing portfolios to remain competitive.

It’s not hard to appreciate the value of defensive assets, particularly if the economy is in fact decelerating. Bonds, which typically go up when interest rates fall, are usually the first stop in this value proposition. We began substantially adding to defensive assets last Fall, on early signs of a slowing economy. The Fed has been cutting rates this year so naturally, bonds have done well.

But there’s something else going on. If the economy is in fact decelerating, equities should be pricing in a less sanguine outlook than they have so far. Furthermore, defensive assets, to be useful in bad markets, need to move in the opposite direction of equities. Typically, the role of fixed income is to serve as a low-risk, diversifying anchor that protects principal and generates return mainly from income, against which an investor may take on riskier positions like equities.  Today, most bonds sectors are moving in the same direction as equities, meaning their returns may be reflecting more than just their income component (this should come as no surprise, given how low the income component has become). Rather than reacting to interest rate movements alone, bonds are increasingly channeling the same economic factors that may be driving equity markets. To understand how this could be, it’s important to understand the makeup of the broader bond market.

Anatomy of the bond aggregate.

The bond aggregate is made up of approximately 17,000 bonds, roughly composed of US Treasuries, Government agency, mortgage-backed, corporate and some foreign bonds. Each of these carries its own risk and return characteristics. At the simplest end of the spectrum, the price of treasuries is impacted by only interest rates and liquidity.  At the more complicated end of this spectrum, emerging market corporate bonds are affected by interest rates, inflation, credit risk, liquidity, political risk, among other things: 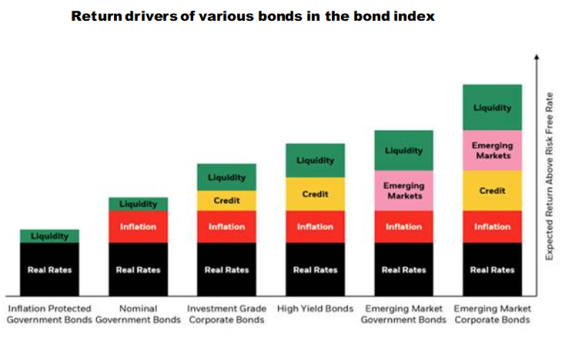 So, while the broad bond aggregate is usually a good way to get diversification in bonds, it is also at times a very polluted way to get the portfolio safety that we need from them. The income portion that makes bonds the low-risk, diversifying anchor so valuable in portfolio construction can be swamped by the other return drivers in the index. In today’s market when we measure the underlying risk drivers of the best performing fixed income sectors, we find many of the same drivers that have driven equity-market performance. In other words, the overall bond market’s performance this year appears to be polluted by equities. This is evidenced by many bonds’ stronger correlation to equities: 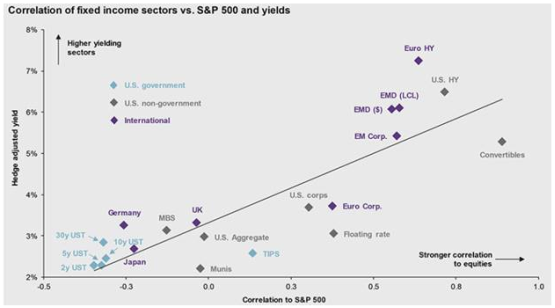 The upshot of this is that most bonds in the bond index are not likely to be good diversifiers should equity markets tank.  The conundrum in managing this risk is figuring out how not to throw out the baby now that the bathwater is dirty.  We’re approaching this problem in two specific ways that have played out well so far and that we think will be more robust in the face of equity market volatility.  First, we’ve reduced equity market exposure by relying more heavily on lower-volatility equity strategies.  This change simply reduces the amount of the portfolio that needs to be hedged. Second, we’ve focused the defensive part of portfolios on the parts of the bond market that remain less correlated to equities, namely high-quality, shorter-term US Treasuries. These have simple and easily measurable return drivers that are much more likely to behave as we would expect in a downturn, particularly when compared to other elements of the bond index.