After a difficult 2020 and a sluggish start to 2021, we are finally able to envision a return to economic normalcy.  As the year progresses, both a fiscal surge and the ongoing vaccine rollout will likely dominate the economic outlook. Fiscal support in the form of the $1.9 trillion American Rescue Plan is expected to provide $1.2 trillion (or roughly 5% of GDP) of additional spending to the economy over the course of just six short months and much of this is targeted toward lower-income households that are more likely to spend it. Notwithstanding the recent pause in the Johnson and Johnson shot, success on the vaccine front continues with more than 100 million doses administered at a pace of close to 3 million per day. As we approach herd immunity in the US, the reopening of service-sector businesses that have been hardest hit by social distancing guidelines will lead to very strong GDP growth throughout the remainder of the year.

By early April, roughly one third of the US population had received at least one dose of the COVID vaccine. Together with individuals who have already contracted the virus, it is estimated that close to half the US population has at least partial immunity. At the current rate of vaccinations, it is likely the country will reach the threshold for herd immunity needed to limit community transmission by the end of summer. Assuming the current vaccine lineup remains effective against virus variants and the current rate of distribution continues, economic life should largely return to normal by early Fall: 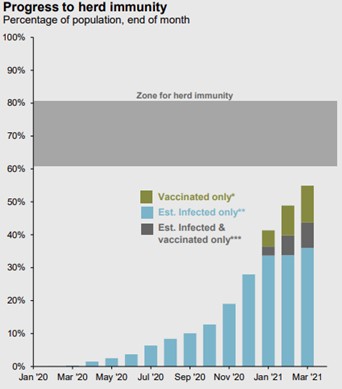 The receding threat of the pandemic combined with another massive fiscal package is setting the economy up for extremely strong growth, at least through the end of this year.  Initially, growth will be driven by pent-up demand and pent-up supply in areas of the economy that have been most hard hit by social distancing guidelines. Reopening is expected to unleash the massive savings buffer Americans have accumulated over the past year, a number currently exceeding 12% of annual consumer spending.  This should translate into overall GDP growth of well over 7% for the year, but even hotter in the early months of the recovery with some estimates exceeding 10% for Q2.

While we don’t have experience in modern times modelling the combined effect of a pandemic, a recovery, multiple massive stimulus programs, and ultra-easy monetary policy, the US has not experienced this kind of growth for the better part of four decades and there is reason to be concerned about a resurgence of inflation at least in the short run. Starting in April, inflation numbers looking back one year will register large percentage gains due to the base effect of the low numbers from the inception of the economic crisis. Combined with higher commodity prices, a weak dollar and strong renewed consumer spending, there is likely to be a large jump in inflation starting in Q2.

The Federal Reserve has indicated that while stronger growth will likely be accompanied by higher inflation, it views this effect as transitory and will continue to maintain ultra-low interest rates for the foreseeable future. The Fed only really controls shorter-term interest rates, however.  As growth has picked up and inflation expectations have recovered, longer-term interest rates have responded accordingly, adding significant volatility to fixed income markets during Q1. At times, that volatility has spilled over into equity markets and we would expect more of the same into Q2, especially as larger inflation surprises have the potential to spook markets. As growth normalizes into 2022 and the case for continued fiscal stimulus abates, we would expect inflation expectations to moderate again. Until then, however, inflation surprises will likely be a driver of volatility throughout the rest of the year.